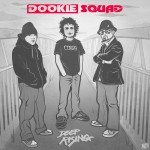 Deep Rising was the Dookie Squads much sought after 2nd vinyl release.

The music was complete in 2007 but not released until 2013 on Dook tha Looper’s label, 1st Bass Records.

Release on limited edition red vinyl, each record was numbered individually by the Dookies 1 -497

The front artwork was the 1st install of art from Phillth which was based on a photo on the back cover taken by David Parsons in their home town of Nuneaton. 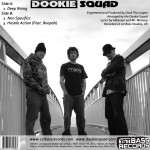 Suspect Packages wrote, Dookie Squad return for 2013 with some brand new material, dripping in that old skool b-boy sound and style, coming fresher than ever. Three heavyweight tracks feature, with both emcees, Alikazam & Mr Memory, trading bars back an’ forth over some big drums from Dook Tha Looper, loving it. It’s pressed on

clear red vinyl and comes in a picture sleeve, nice to have this crew back once again!

Deep Rising was the follow up to the 1994 6 FT Under track again using samples from the Jaws soundtrack as a homage to the 1st version from 1994.

With 20 years between DS001 and DS002, we were keen to revisit the Jaws sounds again.