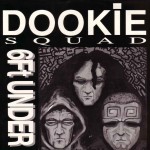 Even though 6 Feet Under was Dookie Squad’s first vinyl release, they had been making music for a few years by this time.

It was during final stages of 2 unheard tracks called ‘The Plan’ and ‘Flow to Go’ that Alikazam mentioned his idea for using the Jaws soundtrack in one of our songs.

It wasn’t until Mr Memory (Pusuka) discovered the Alligator Boogaloo break and it was put to the Jaws sample, the atmosphere in the studio changed. At this point Alikazam (Goody) was on holiday and was yet to hear what his idea had become.

Filled out the EP.

Red Alert is still one of the Dookie Squad’s favorite tracks! The energy of this track when played live at gigs takes the roof off every time!

Red Alert was born out of our love of British Hip Hop at this time during the early 90’s.Dookie Squad’s Red Alert was hugely influenced by the likes of Hijack, Gun Shot, Blade, Hardnoise/Son of Noise, to name but a few.

Knock Out Your Gold Fronts

Knock Out Your Gold Fronts was a track that was derived from the Dookie Squads hatred towards manufactured pop acts attempting to imitate the Hip Hop culture and fashion during the 90’s.